Thousands are going back to frontline cities in Ukrainian- and Russian-held territory.

People who fled the fighting in the east and south of Ukraine are now going back, both to towns under control of the government in Kiev and territory held by Russian troops, Euronews has reported. Testimonies suggest the returnees prefer the risks of living at home to the uncertainty of displacement.

“Tens of thousands” of Ukrainians who were evacuated from the Donetsk region at the start of the conflict have since returned, Euronews’ Russian-language service reported on Monday. According to the mayor of Pokrovsk, some 70% of the evacuees have recently come back to the city, which is on the territory controlled by Ukraine but claimed by the Donetsk People’s Republic.

“We were fed, there was food, but it was temporary. And then we were told to go to a nursing home. My son did not want to,” Tamara Markova, 82, told the outlet. She and her son Nikolay spent less than a week in Dnepr before deciding they’d rather take their chances at home.

Karina Smulskaya, 18, who now works as a waitress to support her family, told Euronews “I understand that being in the city is very risky. But if you leave … Who is waiting for us there? Who needs us there? And we need to earn money!”

Pokrovsk, formerly known as Krasnoarmeysk, is about 60 kilometers from the front lines, near Donetsk.

Moscow is offering Russian citizenship to residents of regions under its control. The government in Kiev has responded by proposing a law that could see Ukrainians who apply for Russian citizenship jailed for up to 15 years. Despite this, some people are choosing to return to Russian-held territories such as Zaporozhye.

Up to 200 cars a day pass through the sole Ukrainian army checkpoint to southern Zaporozhye, according to Euronews. Some people wait up to 10 days for permission to cross. Ukrainian troops warn them of possible danger and inspect the cars for weapons and extra fuel, then reluctantly let them through.

Few of the returnees are willing to talk to reporters, choose their words carefully and prefer to remain anonymous. Some say they want to reunite with their families and look for work, adding that jobs are scarce in Ukrainian-controlled territory.

“My mother and sister live there,” one person told the outlet. “If they don’t bother or provoke [the Russians], they can live more or less fine.”

The UN estimates that some seven million Ukrainians have been internally displaced due to the conflict. Russia sent troops into Ukraine on February 24, citing Kiev’s failure to implement the Minsk agreements, designed to give the regions of Donetsk and Lugansk special status within the Ukrainian state. The protocols, brokered by Germany and France, were first signed in 2014. Former Ukrainian President Pyotr Poroshenko has since admitted that Kiev’s main goal was to use the ceasefire to buy time and “create powerful armed forces.”

In February 2022, the Kremlin recognized the Donbass republics as independent states and demanded that Ukraine officially declare itself a neutral country that will never join any Western military bloc. Kiev insists the Russian offensive was completely unprovoked. 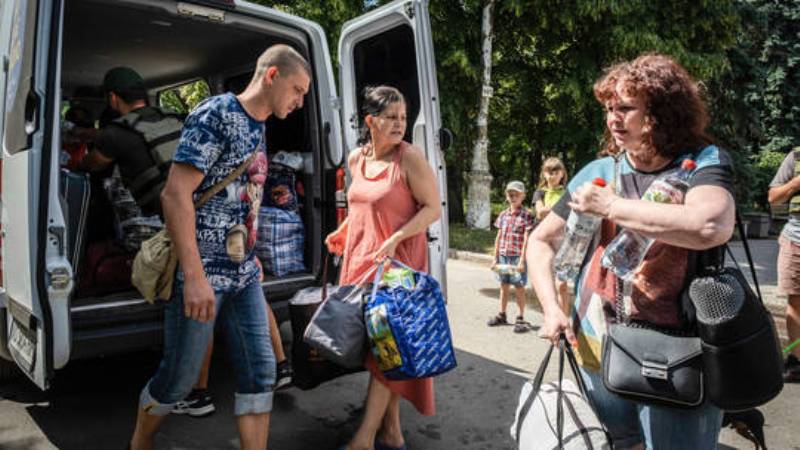