US President Joe Biden’s approval rating has dropped below the 30%-mark to its lowest figure yet, according to new polling results published on Saturday.

The daily tracking survey conducted by Civiqs, an online polling and analytics company, shows that 29% of US registered voters approve of the way Joe Biden is handling his job, with 58% registering disapproval and 13% still unsure.

The poll also found that more than a half of Americans in all age brackets, as well as education- and gender-based groups largely disapprove of Biden’s performance. 66% of white Americans do not support him, but he remains popular with the black or African-American population, with 55% within this grouping saying they approve of Biden’s actions.

The US leader has low appeal in almost all states, with notable exceptions being Hawaii and Vermont. Biden’s home state of Delaware also takes a dim view, returning 54% disapproval.

The US president registered 63% approval with his fellow Democrats and a massive 97% negative among Republicans.

The new figures are revealed after a Harvard CAPS-Harris poll conducted in late June found that only 29% of Americans want Biden to seek reelection. That survey also put his overall approval rating at 38%.

Support for the president is tanking, as Americans worry about soaring inflation, record gas prices and looming recession. The Civiqs poll also followed a turbulent week that saw a July 4 mass shooting, which claimed the lives of seven people. 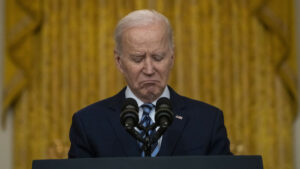