Management at a Ukrainian shopping mall, where 18 people were reported killed on Monday after a nearby Russian air strike, ignored a warning of an imminent air attack, the mayor of Kremenchug reported on Tuesday.

“Ukraine is at war, so ignoring an air raid alert is a crime, which the tragedy in Amstor demonstrated once again,” Vitaly Maletsky wrote on social media. He threatened public venues with criminal prosecution if they fail to evacuate patrons and employees when a warning is given by the authorities.

The mayor posted a screenshot of what he claimed to be the official social media account of the outlet, which informed that it would remain open during alert periods. The policy change took effect last Thursday, according to the timestamp.

Ukraine claimed that a Russian airstrike killed and injured scores of civilians at the mall in Kremenchug. President Volodymyr Zelensky called it one of the “most brazen terrorist attacks in European history”.

On Tuesday, Moscow confirmed attacking the city, but denied targeting the shopping venue. The strike hit a nearby plant where West-supplied munitions were stored before being shipped to the frontline, the Russian Defense Ministry claimed. Detonations of the ammo caused damage to the shopping center, the report claimed. The ministry described the mall as not operational at the time of the attack.

The Russian military regularly launches missile attacks deep in Ukrainian territory but claims it only targets sites of military importance. On several occasions during the four-month-long conflict with Ukraine, it has hit a major oil refinery in Kremenchug, which presumably processed fuel for Ukrainian forces.

Ukraine’s air defense regularly warns the residents of areas that the authorities believe may be hit by Russia, prompting them to seek shelter. The entire Poltava region in central Ukraine, where Kremenchug is located, had been considered under threat on Monday before the mall incident, according to local media.

Russia attacked the neighboring state in late February, following Ukraine’s failure to implement the terms of the Minsk agreements, first signed in 2014, and Moscow’s eventual recognition of the Donbass republics of Donetsk and Lugansk. The German- and French-brokered protocols were designed to give the breakaway regions special status within the Ukrainian state.

The Kremlin has since demanded that Ukraine officially declare itself a neutral country that will never join the US-led NATO military bloc. Kiev insists the Russian offensive was completely unprovoked and has denied claims it was planning to retake the two republics by force. 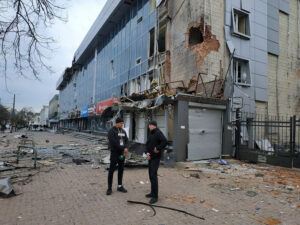