The Russian military on Monday targeted the Kredmash vehicle plant in the Ukrainian city of Kremenchug, the chairman of the factory’s supervisory board, Nikolay Danileyko, has confirmed. The plant is located right next to the shopping mall that was destroyed in a blaze after the missile strike, with 18 people reported killed and over 50 injured.

The factory was a civilian facility and had not produced military vehicles or parts for them since 1989, Danileyko told local media. The plant’s workers were not injured in the attack, he added.

Footage from the scene aired by local media shows a large crater in the middle of one of the factory’s hangars. The strike inflicted heavy damage on the building, blowing away parts of its roofing and walls and rupturing underground piping.

Ukrainian President Volodymyr Zelensky claimed the shopping mall was tightly packed, with “more than a thousand civilians” visiting it at the time of the strike. Footage from the scene taken moments after the strike, however, showed that the parking lot by the mall was almost empty, with several armed individuals in military uniform roaming the area.

The mayor of Kremenchug pinned the blame for the civilian casualties on the venue’s operators, accusing them of ignoring a warning of an imminent air attack.

“Ukraine is at war, so ignoring an air raid alert is a crime, which the tragedy in Amstor [mall] demonstrated once again,” the mayor, Vitaly Maletsky, wrote on social media. 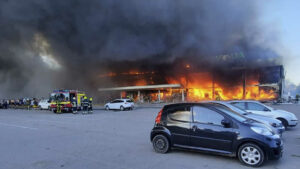