If the warmongering American chastises you for seeking diplomacy, you know you’re doing something right.

Former US Secretary of State, First Lady, Senator, and failed presidential candidate, Hillary Clinton, passed through Paris last week, and seized an opportunity to chastise French President Emmanuel Macron on his own turf.

Clinton was interviewed on state broadcaster Radio France by Christine Ockrent – the journalist wife of former French foreign affairs minister, Bernard Kouchner – who asked about Clinton’s view of Macron’s recent controversial remarks. “We must not humiliate Russia so that the day the fighting stops, we can build a way out through diplomatic channels,” Macron had told the French regional press. “I am convinced that it is the role of France, to be a mediating power.” Clinton replied: “When we say that we don’t want to humiliate Russia, quite frankly, that seems a bit outdated to me. Putin crossed the red line a long time ago.” Clinton added: “I think the ultimate success would be defeating Putin. And in this, I can only agree with what President Zelensky and his government are asking for, that is, a total withdrawal from the occupied territories in Ukraine.”

Clinton perfectly captures the ideological mindset that plagues the Washington foreign policy establishment. We’re a far cry from the statesmanship and realpolitik foreign policy realism of her predecessor, former diplomat Henry Kissinger. He recently told the Davos World Economic Forum that peace in Ukraine should be negotiated within two months and should involve leaving the newly-seceded territories in the East, whose Russophone populations have suffered years of Kiev-led attacks and harassment, under the control of their pro-Russian authorities.

Clinton embodies the prevailing “us versus them” thinking on foreign policy matters. Everything is viewed through the narrow lens of the interests of a precious few American elites, with little care for what might be best for the average American citizen, let alone those of other nations, including Washington’s allies.

Clinton is also part of the Democratic Party old guard that blame Russian President Vladimir Putin when they stub their toe. In just the latest example, President Joe Biden said last week: “We’ve never seen anything like Putin’s tax on both food and gas,” in addressing the inflation that has spiked under Biden’s watch and policies. Putin isn’t taxing anyone in America, just like he didn’t “steal” the 2016 presidential election from Hillary Clinton. But Clinton has publicly blamed “Russian WikiLeaks” for her loss to Donald Trump, referring to WikiLeaks’ release of her campaign manager’s emails (and also “misogyny”), which revealed a cozy, arguably collusive, relationship between the Clinton campaign and the press to Trump’s detriment.

Instead of soul searching about why that might have turned off voters who don’t appreciate being manipulated, or acknowledging the complexities and challenges of technical attribution for any such breaches, it’s no doubt easier to just blame Putin.

Clinton really doesn’t risk much in doing so. Hollywood loves a good villain and Washington can always capitalize on a dramatic narrative that simplifies complex diplomacy into good versus evil. As Secretary of State, Clinton oversaw the NATO bombing of Libya, the migration blowback from which Europe is still feeling.

“We came, we saw, he died,” Clinton jubilated on the set of an interview when she found out that Libyan President Muammar Gaddafi had been liquidated in what was essentially a NATO-backed coup. Clinton reacted to Gaddafi’s death like her team had just won the Super Bowl, rather than treating it like a major geopolitical event with serious and lasting repercussions for regional stability.

Clinton was equally reckless towards Syria in her role as top diplomat, as she cheered the failed US-backed regime-change war against President Bashar Assad through the use of Pentagon and CIA-backed “Syrian rebels.” “We think Assad must go,” Clinton told ABC News. “The sooner the better for everyone concerned.”

Russia was ultimately left to clean up the mess that she helped cause, lest a “Big Bang” of jihadists disperse and find their way to Eurasia. But Clinton clearly couldn’t see past the end of her nose in assessing a potential fallout.

So it’s not exactly shocking that Clinton is now advocating in favor of Putin’s removal from office and the prolongation of the Ukraine conflict. It’s certainly not Clinton who’s going to be paying any kind of price in the event that her misguided advice is pursued, but rather the average Ukrainian, European, and Russian whose interests she’s treating like pawns. And if Emmanuel Macron needed any convincing that his recent stance in favor of peace sooner rather than later in Ukraine – along with the normalization of relations with Russia – is indeed the right path, the fact that Clinton is against it should be reassuring. 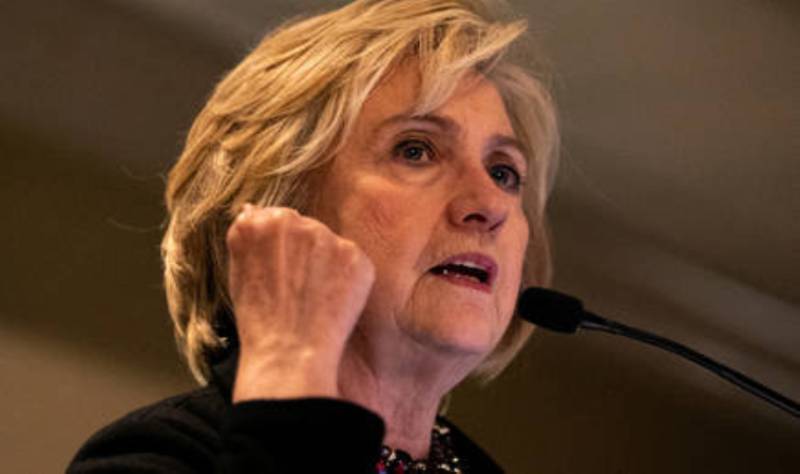